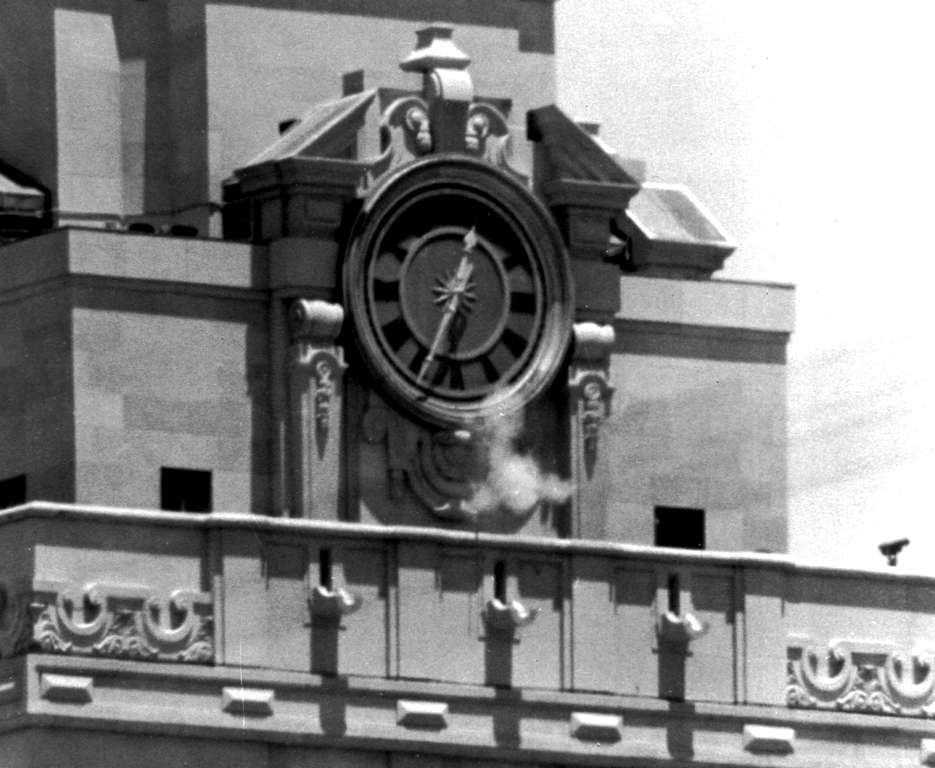 “1966: University of Texas shooting
Charles Joseph Whitman, 25, goes on an armed rampage at the University of Texas in Austin that killed 14 people, most of whom were shot by Whitman while he was perched in the clock tower of the main campus building. (Whitman, who had also slain his wife and mother hours earlier, was finally gunned down by police”

Unfortunately, as we walk our paths  through this journey of life, there will be some rough times, there will be some ugliness, corruption, and hate, but unlike those on the left today care to admit and especially those within the left bias media who spew all the fake news today, you are going to have a few mentally deranged Individuals running around without their meds, simply because when a Government needs to make cuts to save their budgets, the first place they go is the mental health field, then those of us within the society are the ones that feel the true pain and hurt from that.

There was a time when a lot of the mental institutions closed because there was no money to fund, so a lot of patients were either left out in the cold or quite simply, jammed all into one institution and forgotten as if they never existed. The ones left out in the cold had no meds nor did they have a schedule for the meds as the institutions mandated, which left us to deal with these Individuals as those within the Governments had no care for these people, cause they didn’t fit into their agendas.

Now it is of no fault to the mentally challenged as those within the walls of the Governments are to blame because their agendas have nothing to do with taking the proper care of the mentally challenged. Those of us who actually have a conscience totally feel bad for these Individuals, as the rest show no feelings at all, they would rather make the cuts to the institutions instead of to their budgets, so they can keep bringing the corruption and hate to the rest of us. These Individuals within the walls of the Governments and especially today would rather push forth a different agenda, which would be to disarm the rest of us, blaming the whole problem on the guns of the mass shootings. I have a news flash for all within our Government and those within the left bias media, it is not the guns causing the mass shootings, it is the mentally deranged Individuals that have issues to address, but because there is so much red tape for the mental institutions, these Individuals stay on the outside, to reak havoc and ugliness to the rest of us within this society.

These mass shootings have been happening over and over throughout this journey, but those on the left with their socialist agendas would rather point the finger of blame, to avoid taking any action. Those on the left are so deep within the grasp of denial, that they have lost all sight of true reality, so instead of seeing the writing on the wall, they totally ignore the fact of the wall even being there. The hatred of our President today is so great by those on the left, they simply can not see clearly through the clouds of their judgments, then it is the rest of us that end up feeling the brunt of that hatred, as the left has no clue of what they are doing.

You want to truly end all this corruption, hatred and ugliness? It takes each one of us throughout this society to come together, we all need to be on the same page and not some saying they have all the answers when they have zero clues of what is truly going on. Simply because there are some that are in search of all the power of all, the rest of us feel the brunt, the pain, and the hurt, without those few even giving the rest of us the time of day. You want ” real change”, this is the real change we all need moving forward, not the same rhetoric that those on the left keep spewing year after year, we all may take separate paths, but we are all on the same journey through life, Jesus Christ even came to us and showed us how to walk this journey correctly, in order to get to the path of righteousness, it is time we all truly follow in his footsteps, so we all can live in the peace and happiness Jesus showed us, as well as sharing his love with each other always, burying the hatred forever.

” Guns do not kill people, only a deranged individual with issues pulls the trigger of that gun”

” Jesus came to us showing his love for each and every one of us regardless of who you are, we repay him by losing this love for some stupid agenda”