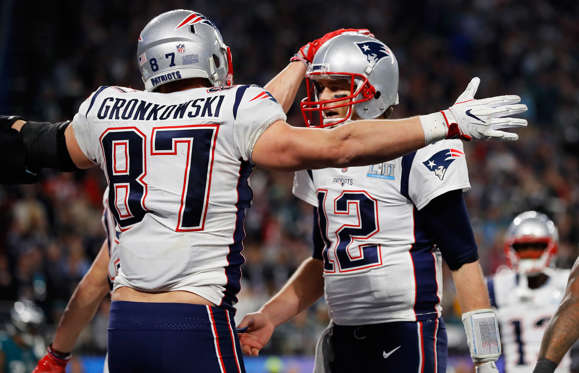 Last nights Superbowl between the New England Patriots and the Philadelphia Eagles, one team over the last couple decades  being the giant and the other team being David and the under dog. Just like as David slew the giant in the Bible, the underdog team the Eagles, took the best shots of the Patriots and slew them to win their first Championship in team history. Now with Tom Brady going over 500 yards, three touchdowns and no picks, that alone if I didn’t see the game, would think the Pats have won yet again? But David……….aka the Eagles stood tall and with a great game plan, slew the patriots and is now the Superbowl Champions.

There will be a lot of story lines coming out of this one, with the sports Journalists trying to spin their takes of the game, but no matter how you slice it, or in this case write it, it was a great offensive football game by both teams, with their defenses being knocked around, like the tumbleweeds within the desert. The game ended as I thought it may, with someone on the defensive side, coming up with a big play and that play came from the Eagles, with the strip sack of the G. O. A. T. Tom Brady. This only proves that you are only as good as your last game and like in any sport, when you have a great game plan and execute that game plan, step up to the plate, then you also can become a champion of whatever sport you play.

The legacy of Tom Brady and Bill Belichek should not be tarnished in any way, shape or form, simply because the Eagles stepped up to the plate with a great game plan and beat a Champion, in a one game take all match, which then proves beyond all doubt, that anybody can be beaten, on any given day. What most people tend to forget is, your legacy isn’t built from just one game, it is built from many games, many accolades through the many games and the Championships you win along the way. Brady and Belichek have done just that and deserve the respect for which they get, but unfortunately in the Politically correct world for which we live, we have all become lazy and do not want to put in the work, like Brady and Belichek have done to get to this point in their career.  Then you have the so called Media, the true cockroaches of the world, that will spin around the spoken word, so they can print them as their own, to fit within their agendas and even worse, create more unnecessary drama, then what is already around us now.

The Philadelphia Eagles not only had a great game plan, executed that plan, but they also stepped up to the plate and beat a true Champion in the sport of football. You could tell they worked hard all year in practice, so on game day they could execute the game plan they worked hard on in practice. Talk is cheap and action speaks much louder, so like the patriots have been doing all these years, the Eagles did yesterday and with that, are now the Superbowl Champions within the world of football. Congrats to the Philadelphia Eagles on their Superbowl win, as now the hardest part is about to hit you and that is, to repeat and keep winning for as long as the Patriots, which then builds a legacy of great football, great practice, showing less chatter with more action and becoming the best you can be, each and every game day moving forward.

” David and the giant may be a Biblical story, but it is a story that when you truly believe, builds character and strength”

” Create a game plan then work that plan and with more action less chatter, makes for a successful game plan”

” The game of football is the chess game of life and with the right game plan, we all can experience being a true champion”